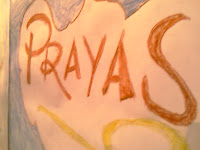 his was one session that most people who missed it would really regret not being present.
- 33 Kids
- 6 Groups with each having a child leader
- 8 Volunteers for guiding
- 8 Pieces of Chart Paper
- A lot of colors
- ONE PICTURE - A Tree in its most youthful bloom :) 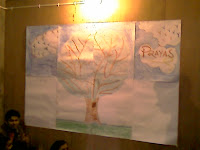 The Objective : The Value of working together.
The Process: Each team was given a set of colors and a sheet to work on. The sheets were all charted out with pencil on what colors to use and what is the direction to take. Each set of children were lead by a child leader who was initially briefed on what work needs to be done by them. They then selected their teams and went in to work. The leaders were given an additional objective to see that all the children in their team were involved in the work done. 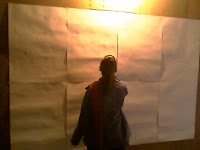 The Moral of the Activitiy: The final picture was a sight worth calling an achievement. The kids themselves were able to explain the moral of the story at the end of the activity - Working together we can achieve more.
The Volunteers: Charu, Kavita, Ruchi, Anand Bhai, Atul, Nikunj, Rajiv & Arun
A big applause to Kavita who initiated the idea and spread the fire :) 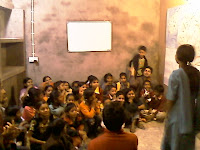 Missed it..and regretted too. :-( This is the only reason I regret shifitng from Noida. God Bless you Guys. :-)