Christmas Gift - A Day of Picnic with AID-Prayas kids

If you were asked about specialty of 25th December of any  year ,The elder remember it as  "Christmas Day " and younger one for the "Santa" and his gifts .And here "AID-Prayas" kids got their "Christmas" Gift on 25th of Dec 2010 .

The Gift was indeed a day of "Fulltu Masti" as all were set to go for the Picnic.This is kind of a ritual now for last 5 years that kids  go for picnic atleast once in a year,and this year it was on "Christmas Day" . 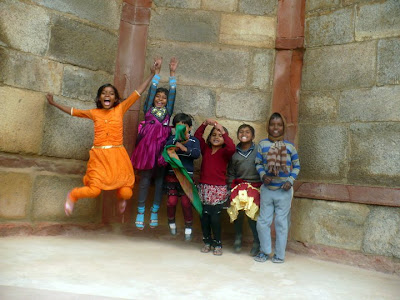 One thing amazes once you enter inside the Prayas community for any kind of celebration ,festival or for any gathering.The atmosphere becomes totally "colorful" & vibrant ,It becomes "Warm" with the enthusiasm of  the little scholars and the presence of their mummy's holding hand of their kids.
Although  Dec 25th was a foggy and chilled morning in Noida ,the excitement to have fun on picnic and warmth of enthusiasm of the kids & of "volunteers" made the morning truly Special & Warm.
Now the Senior kids have started to take little responsibility of the younger ones . Subi,Sona,Jaabaaz and Sajjad  were counting the kids and making a list of all the kids who will join the picnic .Few mothers were requesting to take the younger kids(3-4 years old) for the picnic as well but strictly denied by the senior kids as instructed to them .
"Rajat" the incharge of the picnic,with  "Charu" &  "Linkan" were busy to call the always late volunteers :P and were trying to manage the gathering of more than 60 kids and many parents .Finally at 9 AM some 55 kids were listed to go and few were crying as they were denied to enter the picnic bus being ineligible in age criterion .But later due to their persistent resistance few were allowed and the number of kids reached 57 .
Almost 10-15 volunteers joined the group .With good speakers inside the bus and FM   radio, volunteers & kids started to exhibit their Dancing skills  learnt from the so famous Sheila & Munni :) . The "Garam Samosha"  was distributed as breakfast of the day inside the bus only and thereafter this  dancing journey reached "Humayun Tomb" . 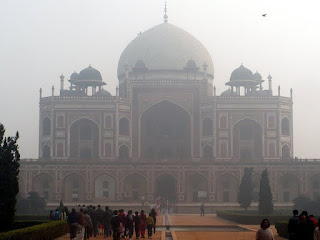 Once you enter inside the main gate of the tomb the very first look of the tomb reminds you "The Taj" in red color .The Prayas family gathered for the "Big family Pic" and then everyone reached the "Humayun Tomb's" main building .As it was a  public holiday so lots of other school kids were there for the picnic as well .We tried to gather all our kids  so that we  can give a small description of "Humayun"  as a Mughal Emperor and about the tomb .
The very first look of many kids and few volunteers  was "uff,again the Bhashan" :P ,fortunately it ended in a couple of minutes :) .The surprise of the day was "Santa Clause" distributing the chocolates to all the kids .Yes Prashant in the RED Santa dress  and white beard were actually looking like a" Santa" thanks to his gr8 built :) . From the beautiful Humayun Tomb the "Caravan" reached the as usual lunch site i.e. The India Gate.The witness of Indian armed forces  Valour ,Sacrifice and Triumph . 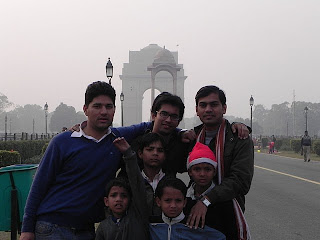 India Gate's open parks have  always been the best  "lunch destination" for the AID-Prayas family for long time .After reaching there all the kids were in their best mode of "Fun & Joy" .Different set of kids plus volunteers  were enjoying different game of their choice .
Here comes the Lunch time when volunteers served the lunch to every kid thanks to Smita & ofcourse Rajat for the whole arrangement of nice food ,Senior kids again took the responsibility to serve the volunteers in the end and with that the entire group completed the lunch.
After lunch the games continued ,India Gate was full of kids that day mostly in school dresses.Around 4 PM we returned to our bus and started for Noida .This time Rajat was fully supported by other members while singing the one and only song "jihaale maski mukum baranjis"  :) .
The dancing caravan reached Noida after the day of "Fulltu Masti"  and as a ritual ,closing ceremony slogan i.e.  "Bharat Mata ki Jai" :) were shouted 3 times with full of energy . 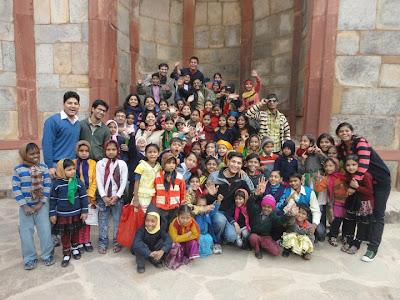 Apart from 57 kids there were approx  15 volunteers  including Rajat,Charu,Linkan,Anant,Sugandha,Anuradha,Nakul,Arnav,Raj,Prashant,Prateek,Shweta,Himanshu ,Smita & Darshan.
The Santa gave a beautiful day as a gift to AID-Prayas family .
It was real good work of  the group members to make this day "Beautiful" .
"Darshan"
Posted by दर्शन at 3:41:00 AM

Smile on the face of kids in first pic is the best part of your efforts...gr8 work guys.
keep it up.