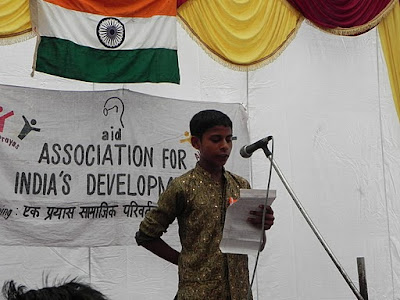 Happiness has two faces, one which brings smile on your face and second which brings smile on other's face, eventually reflecting on your own. Friends, you all might have experienced the former quiet frequently, but the latter is indeed pretty rare and the one I had at the Independence Day celebrations at AID-Noida was a perfect match.
It was an eventful day. It rained quite heavily the other night, but that did no harm to the enthusiasm of the kids or the volunteers, not a bit. The only fear we all had was a leaky tent over our heads, as it drizzled prior to the performance and after the performance, but the program went far smoother than any of us had expected.
Children and volunteers were full of enthusiasm and I could see a dream floating in their eyes. The dream to do something big, for themselves, for their country. The performance presented by the kids did more than proving me right.
The confidence demonstrated by children like Jaabaaz, Kiran, Aamir, Juleikha, Gulaabi, Sajjad,Ajay ,and others, in each of the events like speech, skit dance or event management is really commendable. They could easily speak/perform in front of a crowd of 100+ people which was by no means an easy task.
The entire program was perfectly balanced in terms of content and duration. Every performance was targeted to impart some meaning to the audience. There were a couple of group songs, a couple of dance performances, a couple of plays and a couple of speech by the kids.
The one I liked personally was the play by means of which children were trying to make people aware that this is our country, it is our responsibility to take proper care of public resources and assist the government in every possible way. It was great to see such small kids understanding and communicating these values, who knows it might have changed many minds. It was written by our own volunteer Anvita and directed by our senior batch student Juleikha.
The other play, written by Soumitro and team, enacted by senior batch children, reiterated the importance of national unity over communal differences. The kids performed very well despite of the very little practice we had.
The climax was even better. The penultimate performance was presented by two little girls, both of them reading a poem each, describing a kid's perspective of education before and after having access to books, school and teachers. The poem written by Darshan was indeed very touching, left me thinking that we need such initiatives in every part of the country where education is not much valued.
The last performance was a group dance, which was more than being cherry on the pie. The dance, performed by Shaahid, Shahbaaz, Jaanbaaz, and our volunteer Linkan, was a call to the other kids and parents in the community to wake up and realize that education is our birthright and we all must get the opportunity to fulfill our dreams.
We also gave out small tokes on appreciations for children who have been consistently performing well in academics and have been regular to school. Children like Anju, Nisrat, Usha, Jiya, Dolly, Kiran and many others were awarded for their good performance.
Our teachers Jyoti ma’am and Kulvinder ma’am also came on stage to talk some wisdom for children. It was not just the kids and teachers, but parents also showed equal enthusiasm. Some of them even came out and spoke on the need of increased awareness and enthusiasms from the community.We were also lucky to have Mr Sanjeev, MD Calypto, present throughout the celebration. He appreciated our efforts and promised us for all possible support from his end for our organization

All in all, it was a memorable experience. I had a very nice time with the kids preparing for a skit that was presented on that day. The kids are good learners, friendly and it’s fun to be with them. I look forward to have more days like this at AID-Noida.