When we celebrated 26th January, with the community 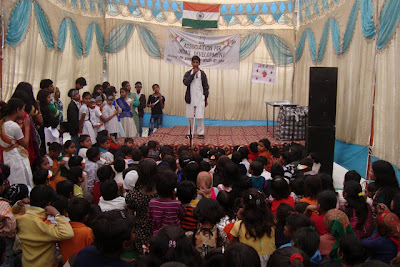 Almost one year back when I visited Naya baas centre for the very first time I thought what is the source of inspiration and why these volunteers are working so hard for this community, there must be some reason behind it. One year down the line when I got closely associated with the system I got both replies which I will share with the last word of this article.But let me first narrate about 26th January at Naya Bans (J,J.Colony Noida Sector-16)
Whenever we think about republic day , what comes to our mind are our moral rights and duties. Every individual must have their own way to fulfill those duties and expectation for rights. Like wise volunteers at Aid-Noida have their own way. May be hoisting flag and distributing sweet could have been one way.But somewhere when we observe J.J.Colony (one where we have our setup) ,we strongly feel a lot is yet to be done before claiming we have performed our duties.
It was a cool breeze blowing in a winter afternoon as temperature was some where close to 15-16 Degree Celsius. The day when everyone from inside feels a sense of proudness being Indian. From last 15 days this kids were practicing hard to give their best and certainly the volunteers' efforts to make sure kids give their best was also appreciable. But will they perform their 100% on the given day was bothering me.
As per the prior schedule disclosed the program was about to start by 1pm. When I visited the centre the kids were dressing up, many volunteers were giving 100% to make sure the kids appear to have done their home work. When I looked at my watch it was 11:30am. For a moment I thought the program might get delayed. In just half an hour I was surprised to see almost all kids were ready with tri-color ribbons in their hand and few of them wearing a tri-color cap.
Last time though I was in this event but my physical presence was not there, so I wanted to feel and sense each seconds of this day. The schedule was in my hand. Dance, Song, Drama, Poem Recitation, Prizes distribution and so many things.
Like every year this was the day wherein we enroll all those kids who had never been to school or nor were a part of Prayas. Thanks to the folks of Opera Solutions who took this activity under Achal's team and there were almost 75+ new names which were registered on that day.


When Avirishu sang these few lines, it brought the patriotic environment around. The program started with The National Song Vande-Ma-Taram which was very well sung by Subi and her team of 12 members. WIth this opening song one who were present over their on that day must have sense beginning of the program. There are few names which don't require much introduction and one such name for this community is our own Darshan Mehra, in his entire speech he made the parents and everyone aware if you can't educate your children you dont have right to bring them into this world. For his speech If I have to pen down I would say I am now short of words.Sakib one of the student of Prayas had presented his words in a wonderful manner. Like every year , all those students who had performed very well in academics, were awarded prizes which were given by Anand Gupta and Linkan was the one who had taken all care for this section. We have also awarded the best Student Award which went to Jainab (for her behaviour & work appreciated by parents, Teachers, Volunteers. She has also initiated for teaching Hindi & English to Masjid kids). The other academics winner was (Jainab -1st Position in Class), (Ashmina -1st poistion in class) ,(Shahid- Best student in his school), (Gulabi - 1st poistion in class) , (Samaira - Winner of lots of school competitions) while best behaviour award went to Subi.
While kids were waiting for cultural program to start , we heard the special mention to Sasken & Opera Solution (companies sponspor the event)
I am very sure every one who had witnesssed the cultural program can sense the amount of home work they have done. There was 4 group dance and each of this dance was choreograph by Apoorva (Daugther of our senior teacher Jyoti mam) whose hard work had paid off with the way Senior boy has performed Kandho se kadhe milte hain which I am sure have charged many of us the feeling of patriotism .Jyoti Mam had prepared two songs and they were well sung by kids. Drama/Play are the best way to communicate the meaning to the audience , it was wonderfully done by both of them. Specially Jungle book the one Anvita Sukhla has prepared and directed by Gulabi and Raja was the centre of attraction. Even the Sarpanch Drama which was well prepared by Shivam, Astha, Samya, Prerna was well communicated, but certainly the frequent problem of audio system distracted the kids at times. Two cute and composed poems was recited by kids and was excellently performed by very small kids on the stage.
Whatever one does, is only understood when someone acknowledge to it. The parents speech made everyone among the audience to feel what this Prayas meant to this community, and how over a period of time things have changed in this community where now 96 kids from this community have joined with mainstream education as on date .Rahul from Opera felt connected and in his short speech said us to have a future long term support with Prayas
The whole event was well planned in the presence of Nai Disha Management (Jeeta Ram Sir ,Keval Krishan ji & Commodore Gurpal Sir ) and words from them were more than blessing for all of us and certainly a source of inspiration.Anand Gupta presented the financial expenses details . There was a few lines for the kids by our one time active volunteer Sughanda Jha.All volunteers where shocked when the senior girls invited all volunteer to present a beautiful hand made care, which came as a surprise to all volunteer and may be they felt that only education is not what they have imparted on this kids.The efforts from all volunteers ( Nakul, Charu, Raj, Anant , Ashok, Anvita) and many more were highly appreciable. Because its the effort of everyone which made the event very well organised and successful
While the results for various cultural event was getting prepared , all audience were shocked to see small kids perform the special surprise of the evening Chaak Dhoom Dhoom. Finally with the cultural event prizes brought satisfaction and smile on kids face .While there was sweet distribution at our centre before that we closed the program on time with national anthem Jana-Ga-mana.
With the ending when kids where in hurry to collect sweet from our centre inside basti,while going back to centre I realized there can't be anything more than success and happiness of this kids which is certainly the source of inspiration of all volunteers to work hard and the and the reason was also clear when I saw a another kids with nearly dirty dress and with abusing language in his communication I said myself there is still a lot to do before making this system a self sustainable one, with a hope next year we will be able to bring more and more story in-front of all of you
Jai Hind

Soumitro Chatterjee
Posted by Anvita at 12:18:00 AM

I guess the kind of work you guys @ AIDS-Prayas are doing for bringing happiness and smile on those kids is really commendable. Wish I could also be a part of that small event but will make sure next time I don't only wish rather be a part of it and say "I am happy to be a part of the event." Anyways I wish each and everyone associated with AIDS-Noida all the best and wish all the kids to be a successful human beings in their respective life.

Good piece of article. Soumitro I know you are a good writer and this was a piece of sample. ALl the best and expect a good ample of your effort in future. Really appreciable effort put in by everybody for this event. I thank on behalf of AID-Prayas Core to our team and wish to get more encouraged for future.

Even though i don't know any names you mentioned there
but I felt I know them from along
Quite descriptive :)

Its a very good job to help kids,whoever it may be,poor or rich,what you
people are giving them is confidence and self respect..That will always
help them in their both personal and professional life..All the best and
keep doing it..Soumitro,your post is really inspirational and now i am also
thinking to join your hand for this noble cause

If you have come from the West and you are captivated by the Asian beauty, in that case, we make sure that you get the best Call Girls in Mahipalpur to help you taste the Asian flavor in the best way. At Mahipalpur, we make sure that you are getting one heck of an experience with our girls. So, no matter whether it is official meeting or bachelor party, we are there for all your needs. Visit:- Here

Do you need a Call Girls in Gurgaon to give you the real pleasure of your life, well, if you revert in affirmative, in that case, you are at the right place. We are a stupendous track record of providing the best girls that would completely take the evening of yours by storm, so to avail them all you need to do is just call and we will provide the best at the right price. Visit:- Here