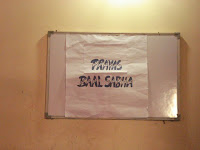 We had our Bal Sabha on August 3rd and initially it was looking like that very few volunteers showed their interest but later on we were 11-12 volunteers and 40 kids :) .
The Program started with the meaning of Bal Sabha and then the experience sharing of the kids. Elder kids Ashmina,Suby,Sona,Zulekha,Danista,Kiran,Poonam etc all shared their experience of being with Prayas.Their talent of Dancing,Singing,Reciting Poems and Imitating volunteers was superb.
Younger kids like Seefat,Parvina Sonu ,Dolly & Ruby were overly enthusiastic about their turn and their poems . Later on Volunteers like Anand ,Selva ,Charu,Linkan ,Satyan,Raj ,Darshan(Me) Shared their experiences of working with Prayas and the journey . New volunteers Bina,Pulkit ,Bhawana were enthusiastic enough to know the system better .
Raj could manage fruits(Banana & Guava ) for all the kids but unfortunate thing was that we the volunteers could not get Bananas :( .
Anyways overall the Bal Sabha went very nice and hope this series will carry on with new energy .We will require new inputs from all the volunteers to make Bal Sabha better and crispier .
Bal Sabha will be on every first Sunday of a month and you people can send your valuable inputs to Linkan (subudhi.linkan@gmail.com ) ,She will be organizing this event with Raj .

Here are the pictures from the event.