Prayas, after a milestone! 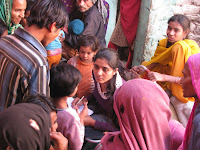 Last month, the admission month! Most of our kids joined Nai Disha. The admission to the school was a two step process, there was a written test first and then there was a convincing session by volunteers. We were around 10-15 volunteers parenting those kids. Nai Disha principal was all influenced by us and she was really a very nice person, amazing was her patience to interact with every new kid coming up and besides that we kept pressurizing her to admit our kids prior to other ones. With our assurance, she was kind enough to admit 21 out of 24 kids we took to the school for admission.

Everybody was happy. We celebrated :). We thought our part was almost done, we were relieved but here comes the tougher part! After a week or so we were summoned to the school by various class teachers. The complaint was that though we got them admitted to class 2nd, 3rd and few of them to 4th std. but their skills and understanding level did not comply with the class std.
Well, morning 8 O’clock we arrived to Nai Disha.

It was funny, as Rajiv entered the class, all the students stood up to wish "Good Morning Sir"! I further entered into the class with the fear of hearing "Good Morninig Madam" but then, some things you can’t avoid :). Anyways so after all those greetings, the class teacher called our kids and explained us few things that need to be emphasized upon to bring them up to the class level. At a point of time we felt like nothing was making much sense to us, we were just good listeners, few were the queries their parents could have answered only and trust me, few were the scolding their parents should have heard only :).

One thing we surely understood was...It was a long way to go! We came back scheduled their daily night classes, 2-3 more volunteers joined us, currently we are focusing on English. We restarted with same intensity! Everything was same except that kids now come with a purpose, and they have school books and fair notebooks with themselves, they have home works to do, it’s a busier schedule to them, they are more engaged, aware and I assume happier. After a month of conducting those classes what we feel now is - It’s always a long way to go and that’s what is nice about Prayas :)
Posted by sugandha at 1:57:00 AM